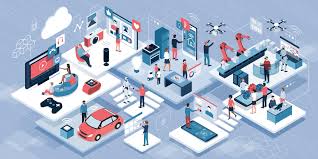 The Internet of Things (IoT) is transforming the world significantly. Because of its automation and data gathering and processing possibilities, it has already demonstrated that it is a beneficial tool. IoT platforms are being created in a wide range of industries.

By providing you with a clear understanding of how everything functions and how the various components interact, understanding IoT architecture is the key to arming you with all the knowledge, you need to build a successful IoT project and take advantage of all its benefits.

A system’s components must interact by a set of rules and regulations known as architecture to achieve a specific objective.

This definition can tell us our understanding of an IoT platform’s definition, development, and contents.

Since projects vary considerably in their scale and use cases, there is no explicit agreement on what constitutes an IoT platform. However, there are several fundamental characteristics that all IoT solutions and projects should have, and these are the ones we will examine.

IoT architecture, in a nutshell, is a framework that specifies:

Although no two IoT projects and solutions are the same, the fundamental layers have never changed. The three-layer architecture has been the superior design for IoT platforms since the first studies on the topic were conducted.

Using a four-stage method is another way to describe an IoT solution architecture. This architecture defines the many components of the IoT solution. Edge computing is more focused in this scenario than the other suggested ideas.

IoT projects are being developed across a wide range of industries, and they have already shown to be handy tools due to their automation and data gathering and processing capabilities. Understanding IoT architecture is the secret to equipping yourself with all the knowledge required to develop a practical IoT project. Another way to explain the architecture of an IoT solution is by using a four-stage process. In this case, edge computing is given more attention.

You can also use akenza.io, a self-service IoT platform that lets you build useful Azure IoT Hub products and services. Akenza.io is confident in its ability to help organizations develop IoT solutions by considerably reducing the workload and complexity.